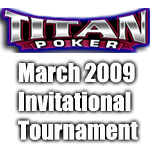 TitanPoker are hosting the March Invitational 2009 tournament on the 29th March. The tournament will have a low buy-in ($2 + $0.20) and an extremely limited field of players (350 Max) all battling it out for a decent prize pool of $2000. New Players who download and use our Titan Poker bonus codeWAP and make a deposit after the 1st February 2009 will be eligible to enter.

Tournaments like this have greater odds for players to win big, first time depositors get a match bonus of 150% up to $600 which includes five TitanPoker Satellite tokens and an instant $25 sign up bonus. 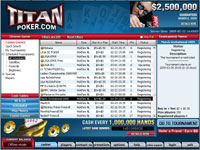 How to qualify for TitanPoker March Invitational 2009

To find the exclusive tournament launch TitanPoker lobby and click on Scheduled Tournaments then All Tournaments. 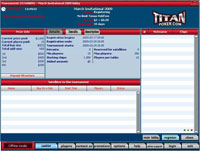 Real money depositors who have made their first deposit at Titan Poker after the 28th January 2009 will get 5 New Depositor Satellite tokens. The satellites awards the top 50 places entry into the TitanPoker monthly $20,000 First Time Depositors Freeroll tournament.

The $20,000 New Depositors Freeroll takes place on February 28th at 20:00 GMT, and every month after that on the last Saturday of each month. New depositing players must use the 5 tokens within three months of depositing or else they will expire.

Main Event buyin, accommodation for five nights including airfair to Ireland in April 2009.

For first time depositors who have deposited at Titan Poker this month. $20,000 in prizes to be won