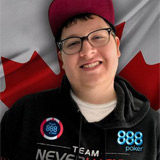 Parker Talbot is a successful online SNG specialist who has had reasonable success on the live poker circuit earning more than $246,368.

TonkaaaaP will be joining David Tuchman as a commentator at 888 Poker live events around the World. He'll also be twitch streaming all his online poker tournaments and game-play at 888poker.

Twitch poker streamer TonkaaaaP is the new member to the roster of 888 poker ambassadors. Parker Talbot will bring his commentary and poker skills to the live poker events and online poker at 888poker.

“I'm obviously a big fan of 888poker as I play a chunk of my online volume there, I'll be streaming 888poker every day I stream, which is currently Tuesday, Wednesday, Thursday, Saturday, Sunday. I play a pretty high average buy-in, but I have recently been mixing in a lot of $20-$50 games for volume because I've realised how awesome the $30 tournaments are on 888poker. So basically, every $22 tournament that runs in my schedule will be played and streamed!” - TonkaaaaP

Parker Talbot's poker career started with a $100 bill which he managed to turn into $8,000 playing games live. Talbot left his studies to pursue poker and earned $50,000 playing poker tournaments.

He then focused on SNG poker games online where he has moved up to the high stakes games playing against the best in the World.

Parker Talbot and David Tuchman will be commentators at upcoming 888 poker live poker tournaments around the World. An entertaining team of poker commentators reporting from the booth.

Inspired by Jaime Staples and the new trend in streaming poker gameplay on Twitch and has been streaming video for more than a year. Using the TonkaaaaP twitch name the channel has just less than 50,000 followers.

Live stream available during broadcast, click the link for the channel to see past video streams on Twitch.  TonkaaaaP twitch - https://www.twitch.tv/tonkaaaap

You can play against TonkaaaaP online at 888poker, you'll find him regularly playing his favorite tournaments: The Whale, Crocodile and the Mega Deep Turbo.