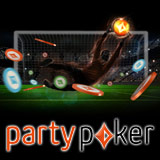 The UEFA Champions League 2016 is about to kickoff and PartyPoker are running a special promotion where players can win prizes for their match predictions.

Guess the outcome of the match correctly and win cash, sportsbets, poker tournament tickets and much more in the UEFA Europa League promotion on PartyPoker.

There is also a promotion on PartyPoker sports where players receive a tournament ticket worth $5.50 on a losing bet placed on a UEFA Champions League 2016 match.

The UEFA Champions League is the most prestigious European football league for clubs in Europe, Real Madrid, Spain are the current champions and most successful team with 11 titles won.

Football fans and poker players can take advantage of this special 2016 UEFA promotion where you'll win prizes for predicting the winning team for upcoming league matches.

Make your 2016 UEFA predictions and win cash, sports bets or tournament tickets when you correctly predict the outcome of a match.

The promotion is only available to players that have signed up and made one deposit of at least $10 in their PartyPoker account. Players can earn a maximum of one click card per day, cards are issued the day after the match.

The PartyPoker Sports promotion also offers an added insurance when betting the minimum odds of 2.00 on the UEFA Champions League 2016. If you place a losing bet of $5 or higher you'll be refunded with a poker tournament ticket worth $5.50.

The tournament ticket can be used to play Power Series Featherweight tournaments like the popular $7,500 guaranteed The Jab tournament.

Players can access the sports betting by logging into partypoker.com website and then clicking on the sports tab to place a bet.

Only bets of $5 on odds of 2.00 or higher will be eligible for a tournament ticket, players can claim a maximum of one ticket per day on a losing bet on UEFA Champions League 2016 matches.

The promotion is only available to players that have made at least one deposit at Partypoker.