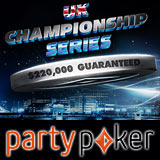 Qualify online at Partypoker by playing the Day 1 tournaments between 21-28 May with four different buy-in levels available.

On top of the guaranteed prize pools, the winner of each final tournament will receive a Caribbean Poker Party prize package valued at $10,000.

This new series of multi-phase tournaments features four different buy-ins amounts ranging from $5.50 up to $530. The series offers four divisions: Featherweight, Middleweight, Heavyweight and High Roller to accommodate players of all stake levels.

Survive any day 1 tournament and you'll be automatically registered for the final tournament of your stake level on 28 May at 8pm.

The winner of each final tournament will also receive a Caribbean Poker Party prize package worth $10,000. Winners will be presented with a UK Championship Series trophy by a team Party Poker pro at the live event in Punta Cana.

Players may enter as many Day 1 tournaments as they like but can only use their biggest stack from each buy-in level to play the final tournament that features guaranteed prize pool.

Look out for team partypoker players Carl Froch, Natalia Breviglieri and Patrick Leonard for added bounty prizes. Eliminate the pros and get a $109 tournament ticket for the Caribbean Poker Party Semi-Final.

On the 28 May there will be an extra three last chance day 1 tournaments running across all four stake levels at 3pm, 5pm & 7pm.

The UK Championship Series Final Day tournaments take place on May 28 the winner of each stake level also gets a $10,000 CPP package. A team partypoker pro will also present all four UKCS winners with a trophy when they play the live tournament at Caribbean Poker Party in Punta Cana.