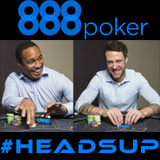 Discussing their past football careers while playing a game of poker talking about everything from best pranks to who would be the best drinking partner.

The first episode of the 888 poker Heads-Up series is pretty good and has a great format for the ongoing series that features different guests each episode.

Wayne Bridge & Paul Ince the two retired footballers sit down for a heads-up poker match while they chat about their football careers. Watch all the episode in the 888poker heads-up playlist in the youtube player below.

Paul Ince tells some stories from the changing room about boot cleaning saying that he used to clean the boots of Billy Bonds and Alvie Martin in West Ham United. When Paul Ince was in Liverpool his boots were cleaned by Steven Gerrard.

When asked who Wayne Bridge would like to play poker against he chooses Craig Bellamy as he thinks he would be hard to read and would talk a good game.

Being known a major pranksters (Paul Ince & Ryan Giggs) Wayne asks what was the best prank they ever pulled. Paul tells the story of how they got Alex Ferguson to renew their contracts.

They when up to his office with a air rifle and confronted him as he stepped out of the shower, Ferguson dropped his towel and stood there but-naked.

Paul Ince asks Wayne who is the worst player hes played with or against and he chooses Rory Delap as manager Gordon Strachan would say he had the worst first touch.

Paul asks on a lads night out who was the most lightweight when it comes to drinking, and inquires about strawpedo a drinking game he heard they played.

Wayne describes strawpedo as putting a straw in a bottle to help the air go out quicker while gulping it's contents down the fastest, a game which he never lost.

They both then end of the chat by going all-in to see the outcome which has a change of luck on the river card.

Check out the 888 Poker gift showers promotion running this festive season, get free tournament tickets when signing up, no deposit required. Or click here to find out which poker site is better PokerStars vs 888 Poker.