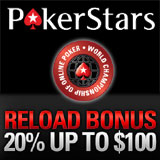 The PokerStars WCOOP 2012 kicks off from the 2-23 September, the World Championship of Online Poker is one of the biggest online poker tournament series. The 2012 WCOOP features 65 guaranteed tournaments with a total of $30 million in prize pools

If you need to add funds to your account to take part in the WCOOP 2012 now is the time, a PokerStars Reload Bonus has been release offering players a 20% reload bonus up to $100.

Players must make a deposit before the 4 September using the WCOOP reload bonus code to qualify. New players can sign-up for free and get a 100% first deposit bonus up to $600.

Reload your PokerStars bankroll for the WCOOP 2012 and get a 20% reload bonus up to $100. To qualify simply make a deposit using the PokerStars Reload Bonus Code 'WCOOP'. The reload bonus must be cleared within 45 days of making a deposit and is released in $5 increments. The bonus is also available in several currencies including: USD, EURO, GBP and CAD.

*The PokerStars Reload Bonus Code is valid for deposits made until the 4th September 2012.

The reload bonus is for players who have already made their first deposit on PokerStars, new players can sign-up and get an even bigger first deposit bonus. Double your deposited amount up to a maximum of $600 at the Worlds Largest Poker Site. New players must use the PokerStars Bonus Code 'STARS600' when making a deposit.

Play the 2012 World Championship of Online Poker buy-in directly on the day of the events are qualify now in the daily PokerStars satellite tournaments. There are 65 tournaments in the online poker series with $30 million in guaranteed prize pools to be won from the 2-23 September, see the full Pokerstars WCOOP 2012 Schedule here.

The winners of every event will also get a 2012 WCOOP bracelet as an extra prize on top of their tournament winnings.

PokerStars Zoom Poker is a fast fold poker game which features more action and excitement than regular poker games. There is less time spent waiting around for other players to make decisions at the table, the fast fold button allows players to fold their Hole Cards as they are dealt and move to a new table with a new hand and different opponents.