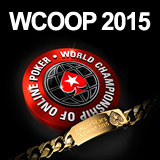 The WCOOP 2015 PokerStars Series is scheduled to take place between 6-27 September on the World's largest poker site.

WCOOP 2015 is like the online version of the World Series of Poker as the winner of each of event will receive a WCOOP bracelet made from gold and diamonds.

You could be the next World Champion of Online Poker on PokerStars!

Complete in the 2015 WCOOP Player of the Series Leader Board and win additional prizes for ranking in the top 10 places.

Satellites are currently running offering players the chance to win their entry for less than the direct buy-in amount, start qualifying now from as low as $0.11 or 1 FPP.

See the full PokerStars WCOOP 2015 Schedule here, download or view the pdf file for more information on the seventy guaranteed tournaments in the series. Tournament buy-ins range from $109 up to $51,000 for the new Super High Roller tournament which guarantees a million for first place prize.

The winner of each WCOOP event will get a special WCOOP bracelet on top of their cash prize to celebrate their victory in the prestigious online poker tournament series.

2015 WCOOP Player of the Series Leader Board