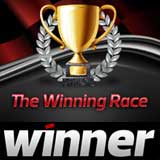 WinnerPoker are running The Winning Race promotion this January, players can win their share of the $8,000 leaderboard prize pool. Unlike regular rake race promotions where players must earn as many points as they can, this promotion only rewards winning poker players.

Players are ranked in the leaderboards based on their Profit = Winnings - Bets, on cash game tables.

Winner Poker is looking for profitable poker players this January, each week there are two leaderboards running where players can compete for $2,000. This promotion kicks off today 5th January 2012, starting playing for your share by generating as much profit as you can on the WinnerPoker cash game tables.

Leaderboard positions are ranked by the players profit using the formula:

Get a 250% bonus up to $2000, one of the biggest and easiest online poker bonuses. Play online casino games at WinnerCasino and get a $1000 casino bonus.

Each week in January there will be four race days where players can start playing profitable cash games to qualify. There are two separate leaderboard groups for players at different stake levels:

Group B is for players playing limits of $1/$2 and higher. The weekly prize pool for group B is $1500 which is split amongst the Top 20 players in the leaderboard.

Players must play a minimum of 200 raked poker hands during the four day race period to qualify for weekly prizes.