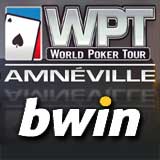 Start playing your your prize package on BWinPoker from as low as $2.20 and you could win an all expenses paid package which includes buy-in, accommodation and travel cost to play the WPT Amnéville France event.

Get up to a $500 bonus when making your first deposit at Bwinpoker sign-up for free Worldwide players accepted, excepting USA poker players.

The WPT Amnéville France takes place from the 1-6 November 2011 at the Seven Casino d Amnéville. This World Poker Tour event is staged in the center of Europe making it viable option for players from several European countries to attend, this is why the WPT Amnéville is a such a successful event with a massive prize pool and a WPT title on the line. Travel to France and play one of the most well renowned live poker events on the World Poker Tour schedule.

BWinPoker have WPT satellite tournaments running where players can win a WPT Amnéville prize package worth $8,000 which includes travel, accommodation and WPT buy-in.

Sign-up for a free poker account and get up to $500 bonus when making your first deposit at BWinPoker.

Play the daily WPT satellite tournaments from 5 September - 9 October 2011, satellites start from as low as $2.20.

To qualify for a WPT Amnéville prize package on Bwin Poker, players must:

Play BWin Poker Mobile on your smartphone and android mobile or the iPhone Bwin Poker App.