Danish 22 year old Peter Eastgate has won the WSOP title for 2008 as well as the youngest winner of the main event since Phil Hellmuth. Eastgate managed to beat Ivan Demidov heads up at the final table winning over $9 million.

Eastgate played 104 hands against Russian Demidov. In the final hand Eastgate limped in and Demidov checked and the flop revealed K-3-2

Eastgate bet $1.25 million, and his opponent called, then revealing a 4 on the turn.

After some smaller bets, a 7 was drawn on the river

Demidov proceed to go all-in 16.45 million chips and was then called by Eastgate.

Eastgate had a straight with A-5

Demidov had two pairs with 4 and 2. 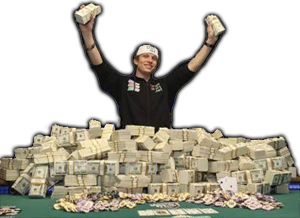 USA Today, got some comments: "I guess I haven't really realized how big this is.

"It will come in the next weeks or the next days. I will become very emotional at some point."

PokerStars.com offer a sign up bonus of 100% up to $50 for first time depositing players when using PokerStars bonus code STARS50
valid for .

Poker Stars have become the most popular venue for poker online, they offer huge tournaments and events and still allow US players access to play for real money.