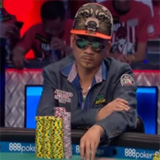 What started out as a playing field of 6,737 players has now been reduced to the final three remaining in the World Series of Poker Main Event 2016.

The 2nd day of the final table started with five players and saw two more eliminations after 166 hands played leaving just three players to fight for the title.

Qui Nguyen has been dominating the final table since the November Nine returned on Sunday, October 30 and now has a massive chip lead for the final day which plays out tomorrow.

With 8 million guaranteed for first place prize plus a Main Event bracelet the final three have set their eyes on the prize for the final stretch.

The World's most prestigious live poker tournament returns for the final day tomorrow to determine the World Series of Poker Main Event 2016 champion.

Although Qui Nguyen has the advance with a chip lead of more than double his 2nd place opponent Gordon Vayo it's no guarantee that he'll win the event.

Day 2 of the final table saw the eliminations of Vojtech Ruzicka and Michael Ruane both taking home almost 2 million dollars each for 4th and 5th place finishes.

You can watch all the action for day 2 in it's entity in the videos below with commentary from Lon Mceachern, Norman Chad and Antonio Esfandiari:

Can Qui Nguyen maintain his lead and take first place position as the World Series of Poker Main Event 2016 champion?

Gordon Vayo with just half the stack of Qui Nguyen could change the game if he gets it in with the chip leader on the final day.

Cliff Josephy, the 50 year old father of three has some work to do to catch up to his two opponents on the final day and claim the victory.

Below are the chip counts of the final three players at the end of Day 2 of the Main Event final table:

For the updates and footage of the 2016 WSOP Main Event Final Table click here.