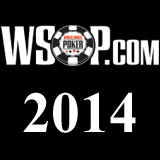 Watch the WSOP 2014 Main Event highlights of the best poker hands of the week from the World Series of Poker. There is also a video of the bubble bursting from the tournament director's point of view.

The Main Event is broadcast each week from the September 28 until November 9 on ESPN with highlights and interviews leading up to the final table.

The 2014 WSOP November Nine players will return for the final table of the Main Event which will feature live footage of the tournament from November 10-11, 2014.

The WSOP website and youtube channel offers a few video highlights for fans who were unable to watch the weekly ESPN broadcast on Sunday nights between 9-10 PM ET.

There are some interesting poker hands plus footage of Jack Effel trying to determine which player is eliminated in the bubble. You can see how much work the WSOP tournament director puts into make sure the game runs fairly, the video is captured using a GoPro camera strapped to his chest.

Kyle Keranen with pocket jacks is up against Chris Johnson who has pocket aces, Keranen doesn't make it easy for Johnson as he applies pressure on his opponent in this tricky spot.

An interesting poker hand with big stack Griffin Benger and Tony Ruberto both having drawing hands on the Turn Card with plenty of raise and re-raise action and great read.

This hand it's Kyle Keranen who has pocket aces against Curtis Rystadt who refuses to fold and calls with rags Q4 off-suit. What happens next is almost unbelievable, players who think online poker is rigged should check out the RNG on this dealer.

This video lets fans see what it's like when the bubble bursts in the Main Event, with Jack Effel's point of view using a GoPro camera.

As you can see in the video it gets a bit maniac as the WSOP tournament director has five all-in calls on the bubble. Jack Effel has to manually go through to each table to watch the hands play out and determine which player is eliminated on the bubble.

There is a special prize for the player who is the bubble boy of the 2014 WSOP Main Event, this player will receive free entry into the 2015 World Series of Poker Main Event.