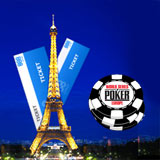 Win a WSOP Europe 2013 prize package on 888 Poker, play the first event in the tournament series plus entry to the WSOPE Main Event satellite tournament.

The WSOPE Combo Pack qualifiers are an affordable route for players to win a prize package, with satellites available for $0.22.

Use the 888 Poker promotion code when depositing and get a tournament ticket for the WSOPE 2013 satellite tournament.

The WSOPE Combo Pack qualifier tournaments on 888Poker are an affordable way to win a prize package for the World Series of Poker Europe in Paris.

Satellite tournaments are running every four hours from as little $0.22, players can win the WSOPE Combo Package in the qualifier tournament which takes place every second Saturday until 28th September.

Register for the qualifiers by clicking on Tournaments & Live Events in the 888poker lobby.

The WSOPE Combo Pack includes the following items and benefits to players who qualify online through 888Poker, the package is valued at $5,500.

If the prize package winner qualifies for the 2013 WSOPE Main Event, 888Poker will pay for additional accommodation and up to $250 for rescheduling flight tickets.

Prize package winner are responsible for arranging their own travel with the $750 which will be paid in to the players account. Winners must agree to wear branded 888Poker merchandise to represent 888 Poker at the World Series of Poker Europe.

Players can win more than one prize package by playing more qualifiers, any additional packages won can be transferred to other players within 7 days.

The 888 Poker promotion codes are valid until 29th September 2013, enter the relevant promotional code on the deposit screen.