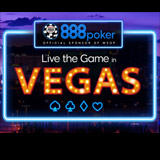 888 Poker as the official sponsors of the World Series of Poker have launched a WSOP League Championship for selected countries which include: Australia, Brazil, Canada, Germany, Poland, Russia, Sweden and UK.

If you reside in any of these regions you'll be able to play country specific tournaments where you will rank in the WSOP leaderboards.

The top 27 players from each country will qualify for the WSOP championship tournament where there are prize packages for the WSOP Crazy Eights Side Event worth $3,000 to be won.

The selected countries will have their own WSOP league and leaderboards where players can qualify for their final championship tournaments.

Starting from just 10¢, the WSOP league offers players the chance to prove they are the best poker players to represent their country at the 2016 World Series of Poker.

The league tournaments take place between 6-20 May are are restricted to the following countries Australia, Brazil, Canada, Germany, Poland, Russia, Sweden and UK.

Finish in the top 27 positions on the WSOP leaderboard in your region and you'll qualify for the WSOP championship tournaments which are scheduled for 23-24 May.

The winner of each championship tournament will win a WSOP Crazy Eights prize package which includes buy-in, travel and accommodation.

For the first time in the WSOP history there will be an eight handed tournament, the tournament offers a $888,888 guaranteed prize pool with re-entries available during the four starting flights.

"An 8-handed tournament is one of my favorite format live events, in an 8-handed tournament, you will obviously see more hands per hour compared to a slow 10-handed game. 8-handed, your hands will be worth a little more, since there are less players in each hand, and you will more often sit with the best hand." - 888 Poker Pro Sofia Lövgren

Players will earn leaderboard points for every tournament that they play, points are calculated by your finishing position, amount of players in the tournament and the buy-in amount excluding re-buys or add-ons.

Only the top 27 players ranking in the leaderboard from each country will advance to the country specific WSOP Championship tournament where the winner will be heading to Las Vegas for the World Series of Poker 2016.