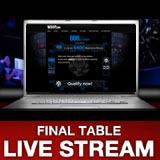 The 2013 WSOP Live Streaming of final tables will be sponsored by 888Poker, players can watch all the action streaming live on PC's or mobiles.

All traffic from countries around the world, excluding USA will see the 888 Poker banners up on the WSOP Live Streaming page.

The WSOP is currently underway be sure to catch all the action of the final tables live with commentary and hole cards displayed.

Watch the WSOP Live Streaming of the final tables proudly sponsored by 888Poker. Check the WSOP 2013 schedule for dates and times of the 62 bracelet events at the Rio Casino in Las Vegas. 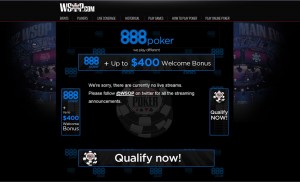 Senior Vice President of 888, Itai Pazner, comments: “We look forward to further building our relationship with WSOP as the live streaming sponsor of World Series of Poker Las Vegas and hope that the premier coverage will reach thousands of poker enthusiasts around the globe.”

Players can get a tournament ticket to the first step of the WSOP qualifiers worth $1.10 in a special promotion running until 23rd June. New players get $8 free on 888Poker.

Make a deposit using a 888 poker promo code in the cashier, promo codes are for players making their first deposit and players reloading their 888Poker account.

888poker are running qualifying tournaments where players can win seats to the 2013 WSOP Main Event or WSOP Europe 2013.

The 2013 WSOP qualifiers can be found in the 888Poker lobby by clicking on Tournaments -> Live Events.

Another great promotion running daily is the 888 Poker Freeroll Frenzy, players can win their share of $10,000 every day until 18th June. The promotion returns to celebrate 50,000,000 tournaments played on 888Poker.

Update: We have updated information for the 2015 WSOP November 9 coverage along with ESPN TV Schedule and live stream details for more about the World Series of Poker 2015 main event final table.