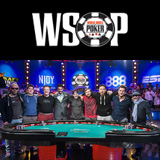 WSOP Live Updates from the Final Table of the World Series of Poker Main Event 2015 at the Rio Casino in Las Vegas. The 2015 WSOP November Nine finalist have returned for the Final Table.

It's been more than three months since the original field of 6,420 players played down to the November Nine, the action starts now with the final table on November 8.

Get the 2015 WSOP live updates right here with all the eliminations and results, as it plays out at the Penn and Teller Theater. In the next three days will know who the 2015 WSOP Main Event winner is, there is $7,683,346 for the first place prize along with the prestigious title and bracelet on the line.

Joe McKeehen is crowned 2015 WSOP Main Event Champion as he defeats Beckley heads-up on November 10, the big stack dominated the final table all the way till the end.

Watch the WSOP on ESPN or from the WSOP live streaming link with a 30 minute delay.

The November Nine seating order is as follows:

Shuffle up and Deal!

Just 15 minutes into the Final Table of the Main Event Joe McKeehen has eliminated Patrick Chan on the 2nd hand of the night, Chan finishes in 9th place earning $1,001,020.

Thomas Cannuli was eliminated by Max Steinberg who ends his Main Event in 6th place earning $1,426,283. Cannuli's pocket aces are cracked by Steinberg's pocket tens after a 10 is dealt on the flop. Another early elimination today with Cannuli out on the 2nd hand of the evening.

The last four players remaining take a break, just one more elimination until the play ends for Day 9 at the World Series of Poker.

Joe McKeehen makes his first and only elimination of the day, Max Steinberg shoved with A-J pre-flop and McKeehen insta-called with A-Q, Steinberg finishes in 4th place with $2,615,361.

It's now heads ups McKeehen verses Beckley with McKeehen having a massive advantage with four times more chips than Beckley.

Beckley shoves his last chips in preflop with pocket fours and McKeehen calls with A-10, there is a 10 on the flop and no change till showdown. Beckley is eliminated in 2nd place earning $4,470,896 and McKeehen is the 2015 WSOP Main Event winner.

The big stack from Day 8 maintained his lead throughout the Final Table and bested all his opponents to win the Main Event, McKeehen is a true champion and claims the title, bracelet and $7,683,346 for first place prize.