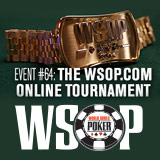 The announcement of the WSOP online bracelet which can be won in Event 64 at this years World Series of Poker has cause much controversy amongst the poker community.

The event was originally going to be played on the WSOP online software until the final two remaining players would battle it out in a live heads-up tournament at the WSOP for the bracelet.

The WSOP online bracelet event is still going to take place regardless of what critics think about it, but there are going to be a few changes from the original format.

The online tournament will now play down to the final six players who will make up the final table live at the WSOP. The live event will also be rescheduled from the 3rd to the 4th July.

The unique idea of combining an online poker tournament with a live tournament will be interesting because players will need to learn who to transform from online poker to the live poker environment. Will online poker players be able to handle the pressure of a WSOP final table and being in the spotlight?

The promotion is a great way to boost the traffic and sign-ups to the WSOP online software in Nevada. Although many old school players are not happy with the fact that WSOP bracelets are too easily handed out these days.

The WSOP Event 64 will run as a trial this year, organizers have been listening to what players have been saying about the event and have already made changes to the format.

These changes will add more excitement to the live event, imagine if the heads-up game had gone ahead and only lasted one hand, it would have been terrible for TV and the dramatic build up to the event.

The rescheduling of the date will give players an extra day to make travel and accommodation arrangements. Unfortunately players won't have enough time to learn how to adapt to playing a live poker tournament which could be really challenging for some players who have never played live.

More details of the WSOP online bracelet will be announced soon and will be available on the official WSOP website.