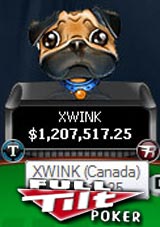 Imagine depositing $4000 at FullTilt Poker then turning it into $2 million in only four days, playing against top pro’s at Full Tilt in including Phil Ivey, Patrik Antonius, and Andreas Torbergsen, well that’s what happened to the new mystery man of poker XWINK playing high-stakes $300/$600 and $500/$1000 PLO.

XWINK’s luck ran short as the following day he dropped $1.2 of his profits while playing wild games against the likes of “Jungleman12” Daniel Cates and “NoPasaran”. Even after a huge $1.2 million loss XWINK is still up over $600k for the month of March, pretty good by anyone’s standards of which it has been reported that $500k has been submitted for cashout.

In a chat with Jungleman12 during his loosing session, XWINK admitted that he was on tilt saying:

XWINK: I’ll give u a good tip

XWINK: I’m so tilted it’s not even funny

XWINK: can you hurry up and take my roll

jungleman12: we can do 4 tables

XWINK: i hope u bust me in less than 1 hour

While no one really knows who XWINK is just yet, it has been determined that he/she is Canadian and could possibly be linked to a Cereus network player account (Ultimatebet / Absolute Poker) XBLINK who shook up their games after winning $700 in an $11 tournament then turning that into $1.3 million in a matter of months. XBLINK ended up an overall winner leaving with a $1.13 million profit and vanished from the scene.

So it’s a pretty similar scenario to previous mystery man Isildur1 who ended up being Viktor Blom. No names have yet been assigned to XWINK so the big question of who is XWINK still remains a mystery that could possibly be solved over the next few months or perhaps he/she will just fade away then come back again in a few years to yet another big poker run, who knows, we will keep you updated.

One thing for sure is that Full Tilt Poker seems to have the really highroller players on their site despite having less traffic than PokerStars.

Watch the live highstakes poker action online at FullTiltPoker, simply Download Full Tilt Poker and create an account then look under the "requests" tab for "Find a Player" (or press CTRL+F (shotcut key)) then search for XWINK.