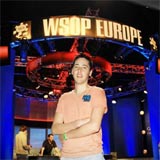 Mateos battled it out heads-up with Fabrice Soulier for more than four hours to defeat the french player in his own country.

This is the third bracelet won by a Team 888poker player throughout the WSOPE series.

There will be three $2,000 Gold Bracelet Freerolls to celebrate Team 888poker victories at the World Series of Poker Europe 2013.

JC Tran will represent 888poker as the chip leader at the 2013 WSOP Main Event on 4-5 November.

The young poker player who has only being playing poker for about a year, managed to take home a million Euros and the most prestigious title for poker in Europe. Diaz had earned more than €300,000 before his Main Event win by playing live poker tournaments in his short but profitable poker career.

Adrian Mateos comments: "I feel incredible, great, it's an amazing achievement. It was tough heads-up, I started really well but Soulier played really well and doubled up through me. Then I changed my strategy to play smaller pots and I started to hit more, everything went better and I managed to win.

Event though I'm young, I wasn't feeling pressure. I just tried to do my best. The bracelet means I've accomplished a great goal, a dream of mine achieved.

And the money, I want to save it up and try to win more. I've got a lot of support from Spain and I want to thank them for their support and hope that now that a Spaniard has won something big, they'll get motivated and start winning more tournaments. That's very important for the [Spanish] poker world because more people will play and more people will see it as something they can win money in.

Yes, I think this is for the long run and I hope to win more bracelets and more big titles. I'm going to try, we'll have to wait and see what happens."

Adrian Mateos has won the 3rd and most important bracelet of the WSOPE for Team 888poker, other victories in the series include Jackie Glazier who won the ladies event and Henrik Johansson.

Other notable finished was Team 888poker player Nicolau Villa-Lobos who finished runner-up in the High Roller Event where Daniel Negreanu took first place for his 6th bracelet and WSOP Player of the Year.

The next big event and the most prestigious tournament in poker, WSOP Main event takes place on 4-5 November with Team 888poker's JC Tran leading the final table as chipleader.

Join in the celebrations at 888poker by playing the $2,000 Gold Bracelet Freerolls which take place daily from 29-31 October 2013.

The freerolls are limited to all players who have made a deposit at 888poker.