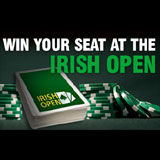 The 2014 Irish Open is one most popular live poker tournaments in Europe, the tournament is scheduled for 18th - 21st April, 2014.

Players can start qualifying for a prize package to the Main Event which includes everything needed to participate in the tournament: Main Event buy-in, accommodation and cash for travel.

Satellites start at just €1.10 and are available from Betfair Poker, WinnerPoker and Titan Poker.

If you've got the skill and the luck of the Irish you could be heading off to Dublin, Ireland for this prestigious poker event.

Get your piece of the action at Europe biggest poker event, qualify in the online poker tournaments to win a seat to the 2014 Irish Open Main Event.

Start planning your route to qualify in the weekly satellites, buy-in directly or play the feeder tournaments running until 2nd April 2014.

Qualify at one of the participating iPoker Network poker sites and get a bonus with your first deposit. Buy-in directly to the weekly satellites or play the qualifying tournaments which start from only €1.10.

The prize package consists of the following items and are valued at €3,200:

Satellites run from 10th November until 2nd April 2014, with two options for players: satellite A is the complete prize package and satellite B is the Main Event buy-in only.

Players can register for these satellite tournaments on any of the following poker sites: Betfair, WinnerPoker or Titan Poker.

The 2014 Irish Open satellites can be located in the lobby by clicking on the Land Based tournament tab on Betfair, Winner Poker or Titan Poker. There are many qualifying stages for each weekly satellite with different buy-ins tournaments and SNG games.