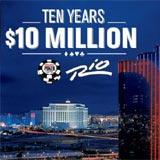 There has been a buzz of excitement over the last week when news about the 2014 WSOP Main Event having a $10 Million guaranteed prize for first place.

The news was originally leaked prematurely by mistake on the official WSOP website, but now it is confirmed and set in stone.

There will be a massive payday for the 2014 WSOP Main Event winner as they will be taking home a guaranteed $10 Million.

The guaranteed prize is to celebrate 10 years of the World Series of Poker taking place at the Rio Casino in Las Vegas.

The 10th anniversary edition of the World Series of Poker at the Rio gives players more incentive to win the 2014 WSOP Main Event which has a guaranteed $10 million for the winner.

This year is expected to reach record figures as online poker has been legalized in some USA states with online poker satellite tournaments available to those players in New Jersey & Nevada on the WSOP online poker software.

The 2014 World Series of Poker Schedule has been release with 65 events announced for the series including: Main Event, WSOP Big One for One Drop, Poker Players Championship and Millionaire Maker.

In total the World Series of Poker is expected to payout more than $200 million in total prize pools throughout the series.

WSOP Executive Director Ty Stewart comments “For ten years we have tried to raise the bar on tournament poker, there is real optimism 2014 can be our biggest year yet with an anticipated $200 million in prize money to be paid out this summer. With new satellites and daily tournaments exclusively on WSOP.com and a plethora of side events, there is more reason than ever to make the trip to poker mecca.”

ESPN will have exclusive footage to broadcast on television to bring all the action to poker fans around the World.

Watch the WSOP on ESPN & ESPN2 with 2014 WSOP Main Event final table coverage of the November Nine broadcast virtual live with a slight delay on the 10-11 November, 2014.

WSOP Big One for One Drop

The other popular high stake poker tournament returns to the series schedule is the WSOP Big One for One Drop which features a million dollar buy-in.

The One Drop tournament will raise it's limit on entrants to a playing field of up to 56 players, this will boost the overall prize pool to become the biggest payout event with up to $20 million for first.

Antonio Esfandiari won the event in 2012 to become the top of the Poker All Time Money List in 2014 for live tournament earnings.

The 2013 World series of Poker broke the record for overall attendance with over 79,000 entrants registering for the events in the series.

Total prize pools generated more than $197 million with most events reaching more than a million dollars in the prize pool.

107 countries were represented by poker players traveling to Las Vegas for the most prestigious poker tournament series in history.