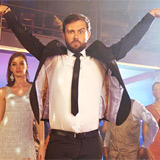 Have you seen the 888 Poker Advert for the Live the Game promotion? the new ad campaign features three commercials that were launched with the latest promotion on 888poker.

The 30 second long 888 poker ads are currently on rotation on UK television stations as well as the official 888poker YouTube channel.

The concept is based on three poker players who view everything as a poker game including real-life situations, the characters are always trying to out perform each other in every scenario.

The 888 Poker Live the Game promotion is the latest offering from the popular online poker site, signup and play for your share of the million dollars in cash and prizes.

The three 888 Poker Advert campaigns feature the same three characters, Dylan, Tyrell and Keenan, who are keen poker players that use the skills of the game and apply it to real life scenarios.

They are all highly competitive like any other true poker player who are always willing to up their game at any expense.

The first commercial is set in a Jazz Club with the three characters playing poker after losing a hand, Tyrell busts a few dances moves on the floor to the music of the Jazz band.

Keenan then raises the game by taking the lead showing his skills on a nearby piano. Finally Dylan gets his turn to impress and has the whole club dancing in sync to his Macarena-styled dance moves.

The scene is set in a Quaint Little Local Café where the boys are involved in a poker game, Tyrell shows off his shuffling and dealing skills with coasters and flicks them at a nearby table just before they place their drinks down on the table.

Dylan is impressed but tries to outdo Tyrell by grabbing a few ice cubes and handling them like poker chips he throws them over his back without looking and they land on three empty glasses on the bar. He tries to flick more ice and misses, the ice lands in the coffee of a nearby table splashing cream into the face of the drinker who appears to be having some sort of mafia meeting.

The three players are playing poker around a poolside at a hotel holiday destination, Dylan sees someone dive into the pool from the high dive board and decides to show off his skills.

Tyrell tries his humorous signature dive move in the horizontal position with a pillow under his head. Keenan pulls off a perfect dive but loses his swim gear when he lands and his mates fish them out the pool.

The 888 Poker Advert series of videos launched with the online poker promotion 888 Poker Live the Game which features over a million dollars in cash and prizes to be won at 888poker until 15th March, 2016.