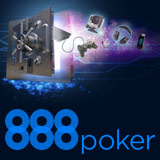 The 888 Poker Break the Vault promotion runs for just a few days and is available daily until the 28th June.

Get your seat to the $5,000 Big Break Tournament where there are special prizes to be won including: iPhone 6s, GoPro Hero 4 cameras, PS 4s and more.

To qualify for entry to the tournament players must solve a simple riddle on the 888poker twitter profile, the final riddle will be posted on 26th June.

Crack the code in the 888 Poker Break the Vault promotion and get entry to the $5,000 Big Break Tournament on 888poker. Daily riddles will be posted on the 888poker twitter feed with the final riddle posted on the 26th June.

Players with the correct password will win entry to the 5,000 Big Break Tournament where they can win one of the following fantastic prizes:

Winners of the Big Break Tournament will receive a voucher code to claim their prize from the 888poker store within 72 hrs of the completion of the tournament. Players that are based in countries where 888poker cannot ship prizes will be given the cash value instead.

Today's riddle for #888vault is: How old was #Team888 member Dominik Nitsche when he won his 1st WSOP bracelet? http://t.co/ZfOkPqntop

Additionally players can get five more tickets to the 888 Poker Million Dollar Money Grab tournament by tweeting the message along with their 888poker username. Tournament tickets will be issued within 48 hours of the end of the promotion.