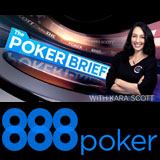 The latest episode includes the upcoming Super High Roller Bowl 2017 which is going to be streamed on both Poker Central and NBC Sports.

And the long awaited news that affects players from Absolute Poker and Ultimatebet who have been waiting six years for their bankroll refunds following Black Friday. How to claim your funds before the deadline date 9th June, 2017.

Kara Scott also interviews Maurice Hawkins who was awarded the breakout performance of the Year at the American Poker Awards.

Summer is the best time for live poker in Las Vegas, in my opinion and it all kicks off at the end of May with the Super High Roller Bowl which will be streamed on poker central and aired on NBC Sports.

The Super High Roller Bowl won event of the year at the American poker Awards for the 2016 iteration of this high-stakes tournament. The broadcast received great reviews last year in particular for the live commentary by Nick Schulman and Ali Nejad.

888 poker has of course signed on once again as a sponsor for this premiere poker event. Now to celebrate that 888 poker is giving players a chance to explain why they should win a trip to visit the set of this incredible high roller. Rub shoulders with all the big names in poker and check out all the backstage action.

The lucky winner will get all of that and five days in Las Vegas at Aria Resort and Casino so check out the link for more details on how to enter. Time is getting short so all of the out-of-towners are booking their tickets to Las Vegas and that includes 888 poker ambassador Dominic Nietzsche. He's hoping to take this one down.

Well it's hard to believe the Black Friday was six years ago it's poker's remember where you were when moment. It's been a long and painful process for many simply to get their money back from where it's been locked away. PokerStars paid their US players back but Full Tilt Poker and Absolute Poker could not.

Former Absolute and Ultimatebet customers can start their claims by filing a petition for remission on www.absolutepokerclaims.com and then hope that there is enough left to pay them all out. The deadline for filing is June 9th of this year so if this affects you get online and get the process started.

One big-name player who had about $100,000 on absolute when it was frozen is Daniel jungleman Cates. The first notification for him were sent to an old unused email address but he did manage to finally get it and has filed for compensation. He pointed out that poker players can be sometimes obsessed with bad beats but getting the claims process started finally after six years is like hitting a two outer that they'd originally been cheated out of. He told me poker needs more good beats.

And finally Maurice Hawkins he had an incredible 2016, taking three World Series of Poker circuit rings including three main events and this all clinched him the honor of breakout performance of the Year at the American poker Awards in February.

Kara Scott: Hey Maurice first of all congratulations it seems like you're really grinding for the 10th ring so what was it like the moment that you actually clinched it?

Maurice Hawkins: It was great because I flopped the full house when I got Ace High

Kara Scott: Now I remember it wasn't actually that long ago that we were giving you an award for breakout performance of the year at the American poker Awards you know 2016 was just an incredible year for you it looks like 2017 is going the same way. So what is it that's making the difference about your game or your approach to the game what is it that is doing this?

Maurice Hawkins: I think it's more about figuring out the systems to beat new certain type of players and after awhile there's a certain algorithm or approach and once you get it down and you tweak a few things here and there it just comes out to the numbers on it. You're going to hold or you gotta excel at that moment, so I think is this more so I'm remembering and I'm locked in on my certain system that I use for a few tweaks here and there and I think the results are starting to show up.

Kara Scott: What is it that helps you focus you said that you got to a point where you knew you needed to focus and you did and it made the difference, so what do you do to do that?

Maurice Hawkins: just always feel like it's my last chance to play poker, always be grateful for the things I have. With great skills comes great opportunity and sometimes we take that for granted. When things come easy you lose focus like, I like to say when I'm going out the day after we bag and tag you see all these people getting drunk and hanging out and having a good time. And what do I do, I go up to my room or watch a movie and I talk to my wife and I go to sleep. I think that that attitude the determination is made me a little bit better than my competition.

Kara Scott: well congratulations again I'm really looking forward to seeing what you do at the series this summer, and you know stay focused.

Maurice Hawkins: Yes that's the goal and I'll see you soon I guess, thank you.

Kara Scott: no thank you, appreciate you talking to us.