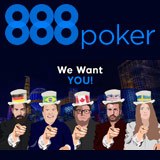 The 888poker 8-Team consists of poker pros and online qualifiers that will be representing the brand at the 2017 WSOP Main Event.

There will be five teams from different countries each will have a captain, wing man and an online qualifier from 888poker.

888poker are once again the only poker site that is an official sponsor of the World Series of Poker.

888poker have made up five teams from different countries (Brazil, Canada, Germany, Sweden & UK) to represent the brand in the 2017 WSOP Main Event.

Each of the five teams will have a captain, wing man and an online qualifier who has qualified online at 888poker.

As an extra prize the Team which performs the best in the 2017 World Series of Poker Main Event will earn a 2018 WSOP Main Event prize package for the online qualifier of that team.

888poker are running a promotion for all Main Event qualifiers that won a prize package online and continues on to win the 2017 WSOP Main Event. The online poker site will add extra cash to their winnings to make sure they are guaranteed a first place prize of at least $10 million.

Chris Moorman is head of Team UK with $14 million earned in both live and online poker games. Moorman is joined by wing man William Kassouf the UK professional poker player.

The newest member to Team 888 is Parker “TonkaaaaP” Talbot who is a dedicated poker video streamer on Twitch and also works with David Tuchman on commentary at live poker events.

Dominik Nitsche is a three-time World Series of Poker bracelet winner earning over six million in live poker tournaments and is the 888poker Ambassador for Germany.