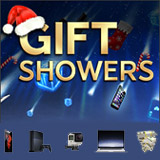 The 888poker Gift Showers promotion returns this festive season with a series of free tournaments which offer over $700k in cash and prizes.

There are three daily Lucky Star Tournaments each with a $2,000 prize pool and a daily All-in Gift Tournament with an iPhone 6, PlayStation 4, Go Pro Camera & much more to be won. There is also a weekly Starburst Tournament with prizes like Mac Book Airs, Apple TVs and huge cash rewards.

Get free tournament tickets by signing up to 888poker, no deposit is required to claim and you'll get up to $88 in poker bonuses as well.

Play for your share of more than $12,000 in cash & prizes everyday on 888 poker in the Gift Showers promotion which runs until 4th January, 2016. Win fantastic prizes daily including an iPhone 6, GoPro camera and PlayStation 4 and much more...

Signup between now and the 4th January, 2016 and get free tournament tickets to the All-in Gift Tournament and Lucky Star Tournament. New players are also eligible for a free sign up bonus up to $88, no deposit poker bonus.

Win extra tournament tickets for the 888poker Gift Showers promotion by completing the daily 888poker missions, players will receive special mission via emails after signing up to 888poker.

For more information on the Gift Showers promotion on 888 poker click here.