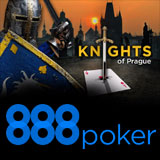 The 888poker Prague Championship II is part of the 2013 Prague Poker Festival as an exclusive 888 Poker live event.

The tournament will be a 2 day event scheduled between the 6 - 9 December 2013 at The Andel's Hotel & Card Casino, Prague.

888Poker are running qualifiers where players can win a prize package for the Prague Championship II live poker tournament.

Prize packages are valued at $1,800 and includes tournament buy-in, accommodation, travel and an invite to the VIP party.

Qualify for your prize package on 888poker, daily satellites are available starting from only $1.

888Poker are hosting their own live poker tournament at the 2013 Prague Poker Festival, players can qualify for their seat to the 888poker Prague Championship II tournament online.

Win your seat online and get access to the VIP party with drinks and canapés on the first day, the two-day event starts on Saturday

Prepare for battle with the Knights of Prague promotion on 888Poker, qualifiers are running until 23 November 2013.

Play your way to this special 888Poker Live Event for only $1, see the full qualifying structure below for details on how to qualify.

Players can register for the qualifiers by clicking on TOURNAMENTS then LIVE EVENTS in the 888poker lobby.

Download 888Poker - new players get $8 free and a free tournament ticket for the 888Poker Giant Freerolls, no deposit required.

Win a $1,800 prize package for the 888poker Prague Championship II which is scheduled to take place from 6 - 9 December 2013. Prize packages include

The Prague Championship promotion runs until 23 November 2013, players who win prize packages must attend the live tournament or forfeit their prize.

Travel cash will be paid into the players account, players must use the cash to arrange their own travel and any documents, visas required to attend the event.