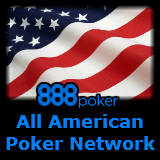 AAPN will be the official network provider for Caesars Interactive Entertainment and Treasure Island which will combine players from Nevada and Delaware. As previously reported Delaware Poker Joins Nevada for Shared Players to help boost the poker traffic in both states, a deal was struck between Nevada and Delaware governors Brian Sandoval and Jack Markell earlier this year.

The All American Poker Network is powered by 888 poker who offer the official poker software for the WSOP online poker room and soon to be released Treasure Island poker site.

The Nevada Gaming Commission gave approval for the AAPN to share it's players with Nevada and Delaware and possibly opening the door for other states to be added in the near future.

AAPN approved for Multi-State Poker in US

Approval from the Nevada Gaming Commission gives the All American Poker Network a head start as the first Multi-State Poker network.

The WSOP poker site has been utilizing the 888poker platform for quite some time, Treasure Island will be added to the list of All American Poker Network poker sites.

888poker and the All American Poker Network are also the official sponsors of an upcoming poker TV show Poker Night in America which will no doubt help the brand establish itself in the US market.

The cash game is requires a minimum buy-in of $5,000, with lots of action and behind the scenes, for more subscribe to Poker Night in America on youtube.

PokerStars NJ license application was denied in 2013 under the ownership of Isai Scheinberg and son. Things are looking brighter since Amaya Gaming acquired PokerStars for almost $5 billion recently, the company already has approval for a New Jersey license.

PokerStars would be welcomed back by most US poker players as it was a trusted brand in the USA prior to Black Friday. PokerStars also helped repay millions back to USA players when it acquired Full Tilt Pokers assets.

PokerStars will be a huge contender in the US market if approved in regulated states, 888poker CEO also welcomes the presence of PokerStars back to the USA.