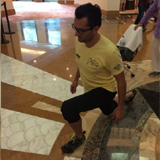 The $50,000 Antonio Esfandiari Prop Bet with Bill Perkins for lunging has been completed with Antonio winning the bet but at what cost?

This week Esfandiari was disqualified from a PokerStars Caribbean Adventure event for urinating in a bottle at the table during the tournament break. He was to exhausted to lunge all the way from the poker table to the toilet.

Esfandiari has apologized profusely stating it is not the example he would like to set for his son, to restore balance and correct his wrong doing he has donated his $50,000 prop bet winnings to charity.

Esfandiari has released an official statement apologizing to the poker community and PokerStars for his inexcusable actions.

Antonio Esfandiari takes his prop bets very seriously but seems to have taken his latest bet with Bill Perkins a little to far offending many people in the poker community. The prop bet required Esfandiari to lunge instead of walking for 48 hours during the bet to win $50,000.

Esfandiari was exhausted on Day two at the PokerStars Caribbean Adventure and relieved himself at the table into a bottle during the tournament break, he was disqualification from the tournament as it was a breach of etiquette at the poker tables.

It makes me quite sad to write this. All the things you have heard are all true. I can sit here and try to explain and justify but at the end of the day my actions were completely unacceptable. What's done is done. All I can do is learn from my mistakes and grow from them. I have apologized to anyone and everyone who may have been affected and will continue to do so.

This happened because of a big prop bet I had with my buddy, Bill Perkins, that mandated I lunge everywhere for two days. I cannot explain the pain I felt in my legs. I did what I thought was the best play at the time. Looking back now I realize it was a terrible judgment call on my behalf. I am a new father now, and this is not the kind of example I want to set for my son.

I am embarrassed of the actions I took to win that bet. On paper I won, but in life I lost. No matter how much one loves a prop bet there is a limit to how far you should go, and in this case I failed.

Getting disqualified from the tournament is not something I contest. I believe PokerStars made the right call. I would do the same in their position. Knowing that I let people down is what hurts. Sometimes we as humans get caught up in the moment. I let this bet get the best of me.

I won the prop bet and $50,000, but I lost my way. It was a grueling two days, both emotionally and physically, but that is no excuse.

I have been mulling over how to have some good come from this sorry situation and to this end I have decided to donate the entire amount to charity.

$25,000 is going to One Drop, which provides drinking water to impoverished nations, and the other $25,000 to REG, a charity dedicated to reducing suffering in the world. Both are amazing organizations that I am passionate about. I believe in balance, and my life would not be in balance if I kept this money for myself.

Thank you all for taking the time to read this. Lesson learned.