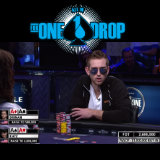 The WSOP Big One for One Drop 2014 Bad Beat video has gone viral as the worst bad beat in poker. Players Connor Drinan and Cary Katz both are all-in with pocket aces in the million dollar buy-in tournament.

A million dollar bad beat for Connor Drinan as Cary Katz hits a flush on the river in this AA vs AA poker hand in the Big One for One Drop 2014 charity tournament.

This is probably the worst poker bad beat ever as the players have invested a million dollars to play the popular World Series of Poker event which consist mostly of businessmen and poker pros.

Las Vegas Businessman Cary Katz is under the gun with pocket aces and raises to 225,000, Sam Trickett, Rick Salomon and Scott Seiver fold. Connor Drinan in the big blind position is also holding pocket aces decides to re-raise to 580,000.

Cary Katz then re-raises with a four-bet to 2,000,000 and offers Connor Drinan some advice "Save your money kid, you can't win every pot". Gameplay is still pre-flop and Connor Drinan shoves all-in with a snap call from Cary Katz.

Antonio Esfandiari predicts bullets and the players both reveal their pocket aces which is pretty sick. Cary Katz then comments "can we just chop" expecting the outcome of the hand to be a split pot.

Scott Seiver comments that this is the same situation which bust him from the $10k event a week prior to the Big One for One Drop 2014. With two hearts on the flop and players joke about that Katz has a 4% advantage to winning the hand, Drinan responded by saying "if I lose like this then whatever"

The turn card is dealt with another unsettling heart card for Drinan, and the situation gets a bit more serious. The river card is dealt and it's another heart eliminating Connor Drinan from the tournament in 18th place.

Drinan loses a million dollar buy-in with his aces verses aces hand in the worst ever Big One for One Drop 2014 bad beat.

The WSOP Big One for One Drop 2014 winner got more than $15 million for first place prize with a playing field of 42 players that raised $4.6 million for the One Drop Charity organization.