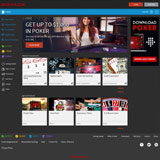 Finally the Bovada website upgrade has been completed but there has been some harsh criticism on Facebook when the news was announced.

Has social networking turned people into assholes or do they have a valid point? Most of the feedback was very negative with customers saying they were going to take their business elsewhere if the old website is not restored.

The new Bovada website features a whole new look running on a completely new system which is very simplistic when compared to the old website. According to their press release the website will have many new features implemented over the next few months.

Personally we feel that the new Bovada website upgrade was much needed for keeping up with modern technology and mobile compatibility. While it is very simplistic at the moment, many new features are still going to be implemented over the next few months.

With the changes some of the older features aren't working 100% yet as they are still probably busying configuring their new system.

Many Bovada players took to the social networks to complain about the new look and how much better the old website was, some even threatening to close their accounts and play at other gaming sites.

You can see the new Bovada website here - www.bovada.lv

The announcement was made on the Bovada Poker blog requesting feedback from clients on the new changes:

As you may have noticed, our website has a totally different look today! We have completely redesigned the site to make it easier to learn about all Bovada has to offer. If you haven’t already checked it out, visit the site now to see all the new and exciting changes.

We will be implementing different features over the next few months to further enhance the site, and we encourage you to check back here regularly for updates and news concerning the new format.

Since this is an ongoing process, your feedback is encouraged. What do you like? What would you like to see? Send us a message and we will be sure to send all suggestions and comments on to the appropriate people. After all – this is your Bovada site.

99% of the comments on their Facebook status update are negative over the changes. Some people complaining about features and functions not working but a majority of people just being downright rude and using offensive language to express their hatred of the new look.

We’re finally up and running. Hope you enjoy the new look and platform.

The new website has barely been up for a few hours, there is probably so much work to still complete on the site and people should really calm down and be patient. Over the next few days/weeks most of the bugs should be ironed out.