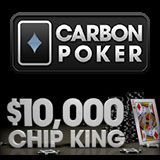 The Carbon Poker Chip King promotion returns in March 2013 with $10,000 in freerolls to be won, players can qualify for these weekly tournaments by simply earning 50 VIP points.

Players starting stacks for these tournaments are based on how many points they earn during qualifying period, earn more points and get a larger starting stack.

The Carbon Poker Chip King offers players the chance to win their share of $10,000 in Carbon Poker Freerolls this March, get your seat by earning only 50 VIP points. Each week the Chip King Freerolls prize pool increases, the final $5,000 freeoll is restricted to the Top 50 point earners in March. Players must opt-in for the promotion from their Player Admin to track

All Chip King Freerolls will become available 24 hours before the tournament begins, players can locate these events in the lobby by clicking on Tournament > Scheduled > Special tabs.

Qualifying players who earn 50 VIP points during the March get their seat to the Carbon Poker Chip King Freerolls, players starting stacks are determined by the amount of points earned based on the table below.

The Carbon Poker Chip King Final is exclusively for the top 50 point earners, the freeroll features a $5,000 prize pool. Players VIP points will be tracked on the Chip King leaderboard when opting in for the promotion.

The Carbon Poker Mobile App is to be released soon offering a mobile poker application for US players. The mobile app is currently being tested and available as play money ring games compatible for iPhone & iPod Touch.

Future plans for the Carbon Poker App include tournaments and compatibility for Android devices and iPad.