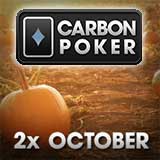 Well it's been a longtime since a Carbon Poker promotion has been announced probably since Black Friday, the latest promotion offers players Carbon Poker DOUBLE VIP Points when playing cash games, tournaments or SNG's on Tuesdays and Thursdays in October 2011 or play Omaha poker games and earn double the regular amount of VIP points everyday in October.

The Carbon Poker 2X October promotion also features a Carbon Poker reload bonus code for a 75% bonus up to $375 for October 2011.

Carbon Poker US players are welcome to sign-up for new player accounts since the temporary USA player ban following Black Friday. New players get a 100% first deposit bonus up to a maximum of $600.

CarbonPoker 2X October where players can earn double the regular amount of VIP points which can be converted to cash. Players can use their Carbon Poker VIP points to purchase items from the store which includes tournament coupon, poker gear and cash.

Carbon Poker 2X October runs from 1-31 October 2011, to qualify players must activate the promotion in their player admin. Click on "Player Admin" in the CarbonPoker lobby and you will be directed to your account page where you can click the VIP Promotions and then the 'Activate Promotion' button to opt-in for the double points promotion.

The answer is YES, since Black Friday hordes of USA poker players chose CarbonPoker as their alternative poker site being the largest USA Poker site still accepting American players. The major increase in traffic and the unsettled waters in the online poker industry caused CarbonPoker to enforce a temporary player ban, the ban only affected new USA player sign-ups as players who had already signed up could continue to play poker online.

Although things have been really quite at CarbonPoker with not many new promotions and rumors that CarbonPoker is the DoJ next target is proving to be just that, rumors and speculation. The traffic on Merge Gaming Network is reported to be on the rise again with an increase of 53% of poker traffic. For CarbonPoker it seems it's business as usual with a new poker promotion Carbon Poker 2X October.

Existing players who have already completed their first deposit bonus still qualify for a reload bonus when adding funds to their CarbonPoker account. There are two Carbon Poker reload bonus codes valid for October 2011, choose your preferred bonus and enter that code when making additional deposits.