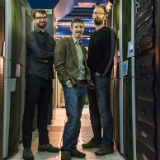 The Cepheus Poker Project have created the first-ever computer program that is capable of playing a close to perfect poker game.

Cepheus poker bot has played more than a billion poker hands of limit heads-up poker games against itself within two months of it's training program.

The bot was programmed with the rules of poker and then perfected it's game by playing more poker hands that the entire human race has throughout history.

The team of the Cepheus Poker Project consists of computer scientists and researchers from the University of Alberta, who have worked on the project for over a decade.

It should be noted that Cepehus is only skilled at limit Texas holdem heads-up games and it's main poker strategy is to learn from it's mistakes and improve with every hand played.

Earlier versions of the software where known as Polaris which was the first computer program to successfully beat some of the best human players in the game. Cepheus was created with the same winning poker strategy but has since managed to perfect the game of poker.

Cepheus is the latest version of the software which has a history dating back to 1997, many years of programming and developing to create a perfect result.

How close is the Cepheus Poker bot to perfect? it is so close to perfect that if a human were to play a lifetime of poker against it, approximately 60 million poker hands, Cepheus would not lose any money in the long run.

Cepheus was programmed with poker rules and spent two months playing against itself improving it's skills with every hand played. To process more than a billion poker hands in it's training period Cepheus required more than 4,000 CPU's to calculate it's decisions.

The Cepheus Poker Project results are considered as a huge breakthrough in artificial intelligence and poker game theory with it's ability to beat human opponents. Many other successful software programs have been developed for skilled games like Chess and Othello in the past.

Poker has slightly different elements that these skilled games as it combines skill with luck and also has missing information that being the opponents unknown cards.

Poker Tools and poker odds calculators are currently available to the public and uses poker theory to calculate probability using percentages and outs.

These are all legal poker tools which are commonly used by poker players online to improve their odds of winning at poker. The software works alongside the poker room software and calculated your odds of winning in real-time.

List of the most popular poker tools used today consists of:

888poker coach is free poker tool available to all registered 888 poker players but it can only be used on the 888poker software. The Carbon Poker Odds Calculator is also a free poker calculator for Holdem and Omaha, exclusively for CarbonPoker players.