Deal is a film about a student Alex Stillman, who wishes to become a professional poker player till one day his dream does come true while playing a PokerStars satellite which gets him his entry into the first event of his poker career.

Deal features a bunch of poker professionals including members of Team PokerStars. Shannon Elizabeth plays the role of Alex's girlfriend with Burt Reynolds as his poker coach.

Download PokerStars and make your dreams come true by using Stars50 as your PokerStars bonus code.

While moving his way up in the poker scene Bret Harrison (The Reaper) discovers ex poker legend Burt Reynolds who notices Alex's skill and provides the funding of his bankroll. Things start to fall apart when Burt Reynolds sees that Alex begins to lose focus on his poker career when entering into a relationship with Shannon Elizabeth.

Bret Harrison later finds himself up against Burt Reynolds at the final table of the World Poker Tour main event. 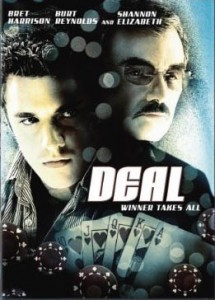 Joe Hachem and Greg Raymer play the role as commentators for the event.

PokerStars have online satellites with prize packages to the biggest live poker events around the world which normally includes travel, accommodation and of course playing poker with the professionals at the live tournament games.

28th April 2009, EPT Monte Carlo will get underway at one of the most glamorous casinos in the world to wrap up another successful season.

You can qualify for just $2.22 or 111 FPP check the PokerStars lobby under Events click the EPT tab.