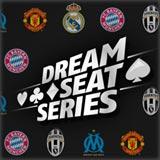 This opens up the door for Bwin to offer a year long promotion that includes winning VIP tickets to upcoming football matches.

Bwin also offer a sports product were players can place bets on their favorite players or teams for almost every sporting event on the calendar.

Football fans can play for VIP tickets to upcoming football matches on BwinPoker, who are a sponsor and partner of several football teams. The VIP tickets include entry to the game with access to the VIP lounge (includes food and drink).

The Bwin Dream Seat Series runs until the end of 2013 with weekly VIP tickets to be won for a buy-in of only $5.50.

Use your poker points to buy-in to the daily qualifier which guarantees 50 tournament tickets, buy-in to the qualifiers for less than a dollar and win your ticket to the weekly final.

The prize pool will also include cash generated from buy-ins, the payout for the tournament will be modified so the winner get most of the prize pool which can be used for travel costs.

Poker players who are from Germany, Spain, Italy, France or UK, wouldn't need to travel to far for the football matches hosted in their country.

Players can play poker tournaments to win VIP tickets for upcoming football games they would like to attend, these tournaments will be available every week throughout 2013.

These are the Dream Seat Series final satellite tournaments for August 2013.