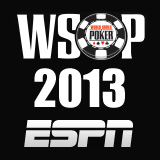 ESPN will wet our appetites with the highlights of the 2013 WSOP Asia-Pacific Main Event with PokerStars legend Daniel Negreanu featured on the final table.

Commentary by Lon McEachern and Norman Chad to keep the poker fans entertained as usual, the reporter on the floor will be PartyPoker's Kara Scott.

Fans can also watch the WSOP 2013 Live streaming all the final tables, proudly sponsored by 888Poker.

Watch the WSOP 2013 coverage on ESPN every Tuesday at 9 or 10 pm from the 6 August running weekly until 29th October. The Final Table of the WSOP 2013 Main Event will be broadcast virtually live between 4-5 November 2013.

Just before the Main Event coverages starts players can catch all the highlights of the 2013 WSOP Asia-Pacific Main Event on ESPN - 23 July 2013.

2013 World Series of Poker on ESPN

WSOP on ESPN TV Schedule may be subject to change.