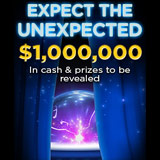 Expect the Unexpected 888 Poker promotion has started with over a million in cash and prizes to be won until 1st November.

There are three daily $3,000 Unexpected Giveaway tournaments where players will win cash plus a mystery prize for the top 50 players.

Spin the Wheel of Mystery everyday to win more prizes which include: mystery prizes, tournament tickets, cash, free sports bets and freeplay on 888Casino. There will also be lots of unexpected prizes to be won by 888poker players throughout the promotion, check you emails for more information.

Win mystery prizes at 888poker in the latest Expect the Unexpected promotion which offers over a million in prizes. The total figure of a million is split up into the following:

On top of the free $88 bonus new players will also receive their three free Unexpected Giveaway free tournament tickets. No deposit is needed just signup during the promotional dates for a free 888poker account to participate.

New players that make their first deposit will get more tickets and will be eligible to spin the Wheel of Mystery where they will win daily prizes.

Players that have already signed up before the start of the promotion will also receive three tournament tickets, see your emails for more details.

New players that signup for a free 888poker account will get three free tournament tickets to join in on all the action with no deposit required to participate.

Play for your share of $9,000 in cash plus additional mystery prizes added for the top 50 players which include: GoPro Cameras, Bluetooth Stereo Speaker, Table Mat, Cash Bonuses, Casino FreePlay, Poker Kits and Deck of Cards.

The top 50 players of each tournament will be contacted within 72 hours notifying them of the prize they have won.

Get two more tournament tickets for the Unexpected Giveaway Free Tournament by simply complete one of the daily poker missions:

Complete five poker missions within a week and get an extra random prize, players can win up to $100 in cash every week. There must be at least two different missions completed to be eligible.

All players that have made a deposit at 888poker since opening an account will be eligible for a free spin on the Wheel of Mystery everyday during the promotion. Players can access the game from the lobby banner in the PC software, instant play software and 888poker app.

Players that login to the 888poker app will be eligible for two spins everyday on the Wheel of Mystery. The 2nd spin will only be available between 17:00 – 24:00 GMT daily.

Here are the prizes which you can win by spinning the Wheel of Mystery:

All Mystery prizes will be received within 72 hours of spinning and winning the prize.