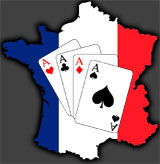 French Poker players will be happy to hear that online poker, online gambling and sports bets have been made legal when a bill was recently passed in congress. Online Gambling operators must acquire a special permit and they must run by the rules and regulations stipulated by the bill. A gambling tax of 2% will be charged for poker and the fees will be given to gambling addiction programs.

The bill was passed just in time for the french people to place their football bets on the 2010 FIFA World Cup in South Africa in June.

The PokerStars France Poker Series is also taking place at casino venues around France from the 1st May until the Grand Final in February 2011. Qualify for your seat with Poker Stars get 100% deposit bonus up to $600 when using PokerStars bonus code Stars600

I think the world especially America take a look at the new French Gambling regulations which allows regulated online gambling provided the Gambling operator abides by the rules. All illegally run sites which do not comply with the bill requires will be blocked by the French banks.

2% tax will be charged for Online Poker and 7.5% for Sports bets

PartyGaming have been one of the first online gambling operators to comply with the permit. Which will allow French players to legally play poker online at PartyPoker. Most of the popular poker rooms will acquire their french licenses before the end of the year. The distribution of the new french gambling licenses will be handled by AJREL (Authority of Regulation of Online games)

These prize packages are available to players from Belgium, France, Germany, Holland, Portugal, Spain, Switzerland and the UK