Full Tilt Poker have added a new exciting poker format called Rush Poker to their games lobby, players can now experience the rush, which the Poker Pros are all raving about, for themselves by downloading the software. Rush Poker is a high speed ring game, when the player folds he is directed to a new table and dealt a new hand instantly.

The new concept is the fastest poker game in the world and with the average of up to 500 hands per hour.

Players can experience a much faster game play with less time waiting for hands by using Quick Fold to instantly transfer you to another table until you find a hand worth playing. On the upside players won't be able to read how you play because of the constant table changing but then at the same time you won't get a chance to read them.

Full Tilt Rush Poker is exclusive and patent pending, you won't find this new style of poker at any other poker site.

Rush Poker is basically a large multi table cash game with players shifting between tables it's almost like a massive version of musical chairs (poker style) where you are dealt a hand and if you don't like the music fold and shift.

When joining a table you can select what stakes you would like to play and choose a table (6 or 9 handed) by the amount of players or hands played per hour. There is a three second countdown and then the intense poker rush begins first hand you will post a big blind to join just like a regular ring game, when you transfer to a new table the player who has gone the longest without paying his blinds become the big blind at the new table and a random small blind.

"Rush Poker is a great way to learn the game of poker." - Howard Lederer
"Rush Poker is the greatest innovation since poker started on the Internet." - Chris Ferguson
"This is what poker should be: a game of action." - Andy Bloch
"Lots of hands, lots of action; I’m going to be playing a lot of Rush Poker." - Gus Hansen
"Rush Poker is a grinder’s paradise. It’s a totally new way to play poker." - Patrik Antonius

How to find the Full Tilt Rush Poker games 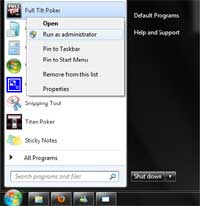