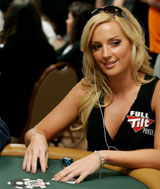 She will be presenting the Doubles Poker Championship a new FullTilt Poker TV show which will air this coming July. Lacey Jones is the latest pro signed up after Annette Obrestad strengthening the ladies on the team.

Learn, Chat and play with the pros online at FullTiltPoker. Get a 100% deposit bonus up to $600

Lacey Jones was previously a reporter for the Ultimatebet Poker2nite TV show, which was pulled from the air after it's second season, Poker2nite also featured presenters Joe Sebok (UB pro and Barry Greenstein's step son) and Scott Huff.

In 2007 Lacey Jones was the official WSOP hostess and bracelet presenter where she also conducted interviews with the winners of each event as they finished on the final table. She has been nick named the  "The Poker Barbie" probably for her good looks, she has also featured in many sexy poker ads for AbsolutePoker and Bluff magazine 2008 cover shot featuring the two sexiest ladies in poker, Lacey Jones and Christina Lindley in their lingerie.

But by no means is Lacey Jones just some dumb blond bimbo, in fact she has confessed to being quite a nerd and often reads up on topics such as quantum physics and is also fluent in French.

In 2010 Lacey Jones played WSOP event #22 Ladies No-Limit Hold’em Championship where she was spotted proudly wearing her new FullTiltPoker patch for the first time and finished 41st of 1054 entrants cashing $4,097.

There are many mixed opinions about the WSOP ladies event, the idea behind the event is to encourage woman to play their very own event to determine who the best female player is at the World Series of Poker, Congratulations to french player Vanessa Hellebuyck for winning the 2010 WSOP ladies event.