Titan Poker have launched their online Super Satellite series, which offers players two chances every week to get into the Irish Open 2009.

Being one of the biggest events on the European poker 2009 calendar, the Irish Open will be held in Dublin, Ireland in April 2009. Get 150% of your first deposit up to $600, when using our Titan Poker bonus code WAP along with the deposit match bonus you will also receive a $25 instant sign up bonus and access to monthly exclusive freerolls.

Titan-Poker offer players with all levels of skill equal opportunity, to win their seat to this world renown event, and take part in the twice weekly online Irish Open 2009 Super Satellites series. Irish Open is one of Europe's oldest Hold'em tournaments, and can be compared as Europe's version of the World Series of Poker hosting many of poker pros and celebrities including Doyle Brunson, Sorel Mizzi, Padraig Parkinson, and Ciaran O'Leary. Last years event had a massive €3,001,400 prize pool with 667 top players after their share of the prize pool. UK player Neil Channing, took home first place winning €801,400.

The Irish-Open 2009 will be even bigger and better it is scheduled to return to Dublin, Ireland between 10th - 13th of April 2009. With a prize pool well over €3,000,000 the contenders will test their poker skills. 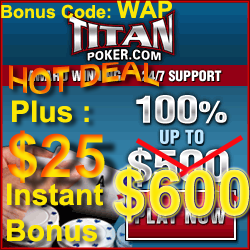 TitanPoker players can win their way to this historic event from as low as $2 + $0.2 in one of many daily Titan Poker's Sit 'N' Go satellites qualifying tournaments.