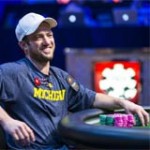 The Final Table of the six handed tournament featured some strong competition with JC Tran and Erick Lindgren also playing for the gold bracelet.

Joe Cada is the latest member of the Multi-WSOP Bracelet winners club which is quite a feat for the 26 year old PokerStars Pro. It's been five years since Cada won the Main Event title at the age of just 21.

Joe Cada took first place in the $10k buy-in No Limit Holdem six handed event on the 17th June in a mid size tournament with a field of 264 players.

"This is definitely up in the top three (events). The heads-up $10K, the Six-Handed $10K, and the $25K. I think those are the three next best events (excluding the Main Event). The victory is sweet regardless. Just winning a bracelet in general is amazing. To win two is a great feeling." - Joe Cada

Winning a single a WSOP bracelet is every poker players dream, to date there have only been 1,134 WSOP bracelets won over the 45 years of WSOP's history.

There are only 138 players who have won more than one WSOP bracelets which includes Phil Hellmuth who is still holding the record at 13 bracelets, but none earned in 2014.

Hellmuth came close to a bracelet win in 2014 but was defeated heads-up against Ted Forrest in 2014 WSOP Event 7.

Dominating the 2014 WSOP bracelets this year is German player, Dominik Nitsche who has won two bracelets in the 2014 World Series of Poker.

Poker fans can watch all the action of the 2014 WSOP Live Stream of the final tables on the official WSOP website here: - WSOP Live