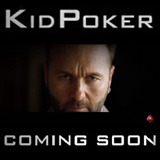 PokerStars have released the official trailer for KidPoker Daniel Negreanu Documentary which is currently in the works and will feature the story of one of the greatest poker legends of all time.

The official trailer for the KidPoker documentary has been released by PokerStars Original Films.

KidPoker Daniel Negreanu is the highest-earning tournament player of all time with six WSOP bracelets and two WPT titles.

KidPoker became a member of the WSOP Poker Hall of Fame in 2014 and has been a Team PokerStars Pro since 2007.

Canadian Daniel Negreanu moved to Las Vegas shortly after he fell in love with the game of poker. As a cocky youngster he always knew he was going become the best at whatever he did. In 1998, Negreanu was the youngest player at that time to win a WSOP bracelet at the age of 23 years old. In his tournament career he has won six WSOP bracelets and two WPT titles.

KidPoker Daniel Negreanu became a member of Team PokerStars in 2007 and has been representing the brand as a professional poker pro and spokesperson.

After his runner-up finish in the 2014 WSOP The Big One for One Drop, Negreanu claimed the title of highest-earning tournament player of all time.

Here are just some of his achievements over the years, biggest cashes, tournament earnings for first and runner-up place in major live and online poker tournaments.