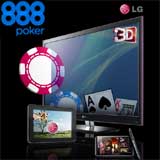 888Poker have partnered up with LG to offer players a brand new promotion where players can win their share of $50,000 in LG products each week in the LG 2012 Giveaway which runs from 12 December - 12 February 2012.

Qualify for your seat to the LG 2012 Giveaway Mega Event, there are satellite tournament and 888Poker freerolls where players can win their seat for free.

New players who sign-up get a $8 free no deposit poker bonus which can be used to play on 888Poker.

LG and 888Poker have joined forces to offer players some fantastic prizes each week in the LG 2012 Giveaway on 888 Poker. The Life's Good at 888poker promotion runs until 12 February 2012 with $50,000 in weekly prizes to be won this holiday season.

To celebrate the LG events the 888poker table will be replaced by an LG TV.

New players can use their free poker bankroll to play real money poker games on 888Poker with no deposit.

Depositing players will also get 100% first deposit bonus up to $600, a bigger bonus than advertised on the banner above.

Below is the schedule of LG tournaments for December 2011, these events will continue every month until 12 February 2012.