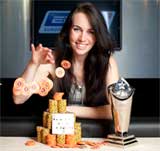 The young UK female poker player eliminated Toni Pettersson in 3rd place giving her a lead going into the heads-up match against Swedish poker player Jakob Carlsson who was chip leader up until that point.

Liv Boeree, who has only been playing poker for four years and had some poker training from Phil Hellmuth, Annie Duke and DevilFish in the UltimatePoker ShowDown Poker TV show.

Liv Boeree plays poker online at UltimateBet Poker, play against her and the other Team UB Poker players. Get a 111% first deposit bonus up to $1100 when depositing at UB Poker using Ultimate Bet Referral Code WAP 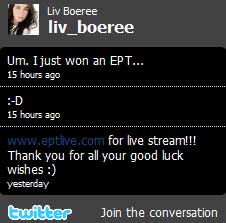 Liv Boeree eliminated 18 year old Finnish player Toni Pettersson in third place when she flop a set of threes and bet big only to be re-raised by Pettersson who paired his king on the board, Liv pushed all-in and was called. This put her in a really good position with 23.2 million chips going heads up as the new chip leader against Jakob Carlsson who had 14.5 million chips.

The ecstatic Liv Boeree was speechless about her big win as she was fearing the heads-up match against Jakob Carlsson because he is such a good poker player. On the last hand Jakob Carlsson shoved all-in with A-6 and Liv called with pocket fives which held up when no ace or six hit the board.

Liv Boeree commented "It's exactly what I've been working towards when I started playing poker four years ago; to win a major tournament, I just didn't think it'd come so quickly."

Who is Liv Boeree? 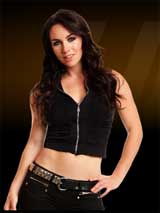 Liv Boeree is a 27 year old female poker player, TV presenter and fashion model from the United Kingdom. She was selected to appear on the Ultimate Poker ShowDown where she received poker lessons from the great Phil Hellmuth and Annie Duke. She won the Ladbrokes European Ladies Championships in May 2008 winning $30,000.

Apart from being a great poker player Liv Boeree has also studied and obtained a degree in astrophysics. She loves sports and skiing not only is she an avid music fan of rock and heavy metal she also has played guitar since the age of 16.

In 2006 she traveled to Vegas to do some TV presenting, interviews and coverage on the World Series of Poker for Gutshot TV. She has also worked on the EPT Season 3, WSOPE 2007, Partypoker European Challenge II and the Metal Hammer Golden Gods Awards.