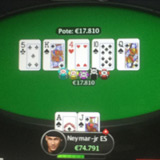 Football legend Neymar is no stranger to high stakes poker games on PokerStars. Yesterday the sponsored PokerStars pro posted a screenshot on Instagram of a Royal Flush where he won more than €17,810 for his premium hand.

Neymar Jr has been a great investment for PokerStars as the Team SportsStars Pro has reached a wider audience through social networks.

Recently Neymar Jr and Cristiano Ronaldo featured in a PokerStars Advert which also gained attention when it was shared to millions of supporters on their official Facebook pages.

Last week the Neymar PokerStars commercial had to be removed from their UK Dream Team campaign. A UK gambling regulation prevents gambling sites from using persons under the age of 25 for promotions.

The probability of the Neymar Royal Flush or anyone getting a Royal Flush is approximately 0.0279%, a very rare hand to be dealt when playing poker. Neymar seemed to get great value for his Royal Flush playing Heads-up high stakes cash games on PokerStars in which he won over €17,810 for the hand.

For those who doubted that the football legend had any poker skills here is the proof that he is as passionate and skilled at poker than he is at football.

Players can win up to a million dollars in the latest PokerStars Dream Team Collection which runs from August 17-September 17. Collect all the puzzle pieces and win random prizes by completing the simple PokerStars challenges.

For each puzzle piece that you collect, you will instantly receive a random reward which includes: $20,000 All-in Shootout tickets and up to $7,911 in cash prizes. Players can also win Golden Tickets to play a special All-in Shootout that pays out $1,000,000 as the first place prize.

Download PokerStars and get up to $600 bonus matching your first deposit amount plus free poker cash just for signing up and making a deposit. Join PokerStars and play poker online against football stars like Cristiano Ronaldo, Neymar Jr and Ronaldo.