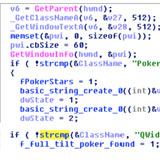 Odlanor Spyware is a new Trojan virus that has been targeting users of PokerStars & Full Tilt Poker software, mostly from Russia and Ukraine.

The software works silently in the background and sends real-time screenshots to the attackers when the victim is logged into their poker software.

The attackers can simply join your cash game poker table and know exactly what your hole cards are, this gives them a huge advantage like UB poker used god-mode a few years back.

Anti-Virus programs like Avast and Avira are able to detect and remove the unwanted virus from your computer. According to PokerStars and FullTilt they are aware of the issue and have found no evidence that any players have lost funds since the virus was released in April.

To date the only two poker sites mentioned are PokerStars and Full Tilt Poker with the code searching for active poker games on the players computer.

The malware is installed when users download files using torrent websites and tools like Daemon Tools, uTorrent, mTorrent and can also be infected by poker tools like: Tournament Shark, Poker Calculator Pro, Smart Buddy and Poker Office. Mostly all downloaded programs, installed by players from the unofficial software websites.

The criminals then start receiving screenshots whenever a player is active at a cash game table on PokerStars or FullTilt. They then search for the players screen name and join the table to exploit that player using the god-mode technique to view their hole cards in real-time.

While most of the virus has mostly been detected in Russia and Ukraine, several other countries have been infected by the Odlanor virus, which is ironically named Ronaldo spelt backwards.

Most players would be unaware of the exploit and probably consider their losses as bad luck or a bad beat, most of the exploitation will only take place on cash game tables.

There have also been reports that the latest versions of the virus now includes data mining capabilities and has the ability to report back players login details.

ESET who discovered the virus have issued warns to players about the Odlanor Spyware and it's potential to cheat PokerStars & Full Tilt Poker players. According to reports hundereds of players have been infected to date.

Note: All poker software downloaded through WinAllPoker.com are legit and safe as they are from the official sources that supply the software.