The new feature is available on the latest version of the PartyPoker Android App, the iOS poker app will also feature SNG games soon.

Android users will see the first release of Sit & Go tournaments on the Party Poker App, iOS version is currently in development will be released at the end of spring 2014.

This is the first time any type of tournament has been released on PartyPoker Mobile, the free poker app has been limited to cash games only since it's release. Hopefully in the next update we'll see the full Party Poker tournament schedule added to the mobile poker platform.

The Party Poker App Android SNG tournaments are available with both play money and real money poker tables. The range of SNG games include almost everything that the PartyPoker PC client offers excluding satellite SNG tournaments.

See the screen shots below to preview the new SNG games on the Party Poker App Android. 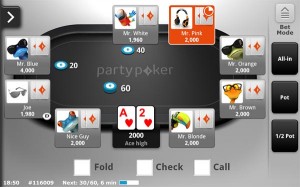 As you can see from the images above, the Sit & Go lobby has quick seating options which lets players find games easier with a selection of stakes with buy-ins starting from only $0.10. Players can also choose between heads-up, 5-6 seater and 9-10 player tournaments.

All the tournament information, buy-in, prize pool and registered players can be viewed on the SNG tab of the Party Poker App when registering and while the game is in progress.

PartyPoker plan to release SNG games exclusively for mobile users at a later stage, these games will include special features for reconnection and loading the table instantly after a disconnection.