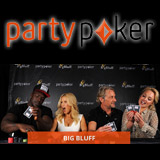 The Party Poker Big Bluff Celebrity Challenge features four UK celebrities that don't have much knowledge on the game of poker.

UK poker pro Simon Trumper will coach the celebs with basics on how to play poker and prepare them for the Grand Prix Poker Tour Brighton, a live poker event which fans can qualify for online at PartyPoker.

They have a few months to develop their poker skills before they are tested in a live poker tournament where the winner gets £5,000 donate to a charity of their choice.

Party Poker players will be given an opportunity to qualify online to join the celebs at the Grand Prix Poker Tour Brighton for the UK live poker tournament.

Jorgie Porter is a well-known UK actress who plays the role of Theresa McQueen in the popular soap opera Hollyoakes, she is also an ambassador for Teenage Cancer Trust.

“I’m super excited to be part of partypoker’s Big Bluff campaign. I’ve always wanted to learn how to play poker and I can’t wait to get started. The competition is sure to be intense but I want to win it for the girls. Bring it on!”

Melinda Messenger is a former model who is now a UK television presenter, the mother of three was voted for Celebrity Mum of the Year.

“I’m so excited to have been invited to this competition! I love anything competitive, let’s see if I can find my poker face for the Party Poker Big Bluff title! I’m thoroughly looking forward to being in the room with the other guys.”

Adebayo Akinfenwa also known as The Beast is a striker for the AFC Wimbledon football team playing over 500 matches and scoring a total of 170 goals in his career.

“I absolutely hate losing and this will be no different – I’m a complete novice when it comes to poker but I hope to pick up a few tips quickly so that I’m ready for the final high stakes poker match.”

Four times Superbike World Champion Carl Fogarty needs no introduction winning two back to back titles in 1994-1995 and 1998-1999.

“I have never really been that into card games and think I have only ever played snap before! But if I set my mind to something I usually do pretty well – and I will be using the famous Foggy eyes to psyche out my opponents to try and win that money for the NSPCC.”